Learn from extraordinary people working to advance accessibility through innovation. Acclaimed neuroscientist David Eagleman is translating and feeding data through the skin using wearable tech. Haben Girma has refused to let the fact that she is deafblind limit her and believes that inclusion is a choice. Jyotsna Kaki lost her sight as a young adult and is now an Accessibility Testing Program Manager at Google. All are dedicated advocates for accessible technology.

90 talks on neuroscience at Ted Talks

Jyotsna Kaki lost her sight in college. She went to Santa Clara center for the blind to learn assistive technology and reading braille

Hardest part of being blind is the lack of understanding from others. People can be disrespectful and stop a person’s progress. Not knowing how to make an accessible product is also problem.

Its very important to think of accessibility from the beginning. If you wait until release, the work involved is significantly harder. Accessible products are more user friendly for all users, not just those with a disability.

She has a braille device/note taker. She uses this to get her notes from interpreters that are sending her feedback from the audience. That is how she knows when people are reacting to the talk. “She’s watching you”

The dominant story is that people with a disability are a burden, a problem. But she chooses to write her own story about innovation, and challenge.

People with a disability create their own techniques.

Tactile sign language is commonly used for people with deaf/blindness.

People with disabilities have multiple methods of communicating. People communicate via their bodies, touch, movement. There’s an intersection of movement, touch, and communication.

It’s only possible when communities choose inclusion. Some communities try to deny access, disability is not the barrier, societies are the barriers. 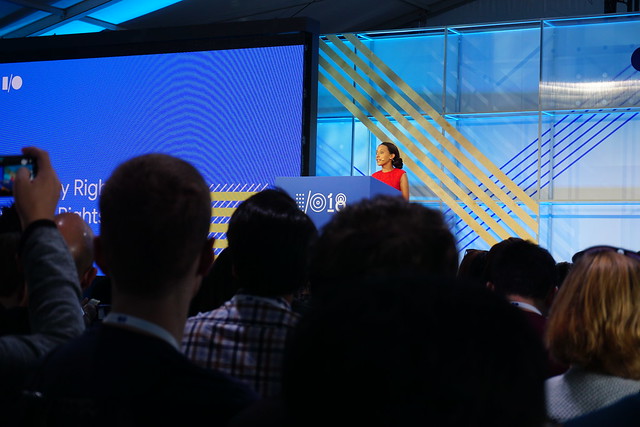 Haben shared a story of not being able to choose from her college cafeteria menu.

Printed menus were not accessible. Blindness was not the problem, the delivery was. Providing the menu via braille, web, or email would be accessible versions. Cafe manager said they were too busy and she should be grateful. But her friends reminded her that it was her choice to accept this or push for full accessibility.

To shatter the glass ceiling, we need to break down the barriers.

She studied the ADA and explained the cafeterias were required to provide accessible alternatives. It is a civil right. She confronted the manager with this information and said she was willing to sue if they did not make the effort. She knew that she needed to try. The next year, a new blind student joined the school and didn’t have to struggle. This is what inspired Haben to move forward with becoming a lawyer at Harvard law school.

Haben was the first deaf/blind law student to graduate because enough barriers have been removed to make it possible for her to attend. Harvard refused Helen Keller’s application because she was a woman. Over time, Harvard removed their barriers for sex, race, and disability.

Google provides accessibility guidelines to remove these barriers. Each person needs to make the commitment.

When we choose inclusion, we role model inclusion for other people.
–Haben Girma

Colors are a tiny part of the electromagnetic radiation spectrum. What we see is just our small filter. Our biology constrains our reality. Each animal has its own window on reality.

Umwelt – german word for an organism’s connection to the surrounding world. Each animal thinks their Umwelt is the only umwelt.

Cochlear and retinal implants use technology to send signals to the body to replicate biologic signals. Our brain is not hearing or seeing things directly. It sees electrochemical signals. It’s great at taking patterns and interpreting those patterns. It doesn’t care where it came from, just what the signal represents. The brain is a general compute device.

You plug in body parts and go for it.

We have what we received via evolution. But we don’t have to stick with this. 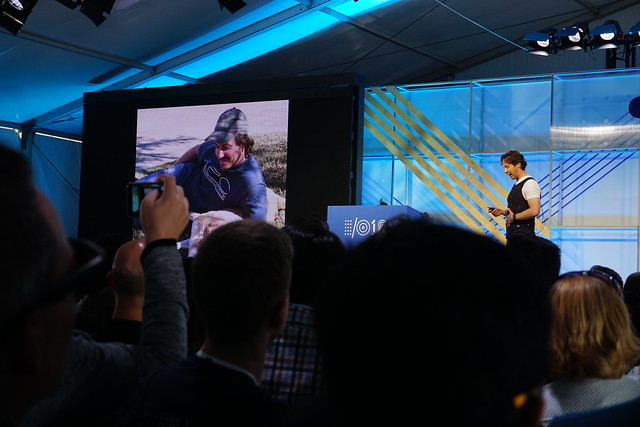 The first paper was published in 1969. Blind people were put in a chair with a solenoid grid and a camera would poke people via a pattern on their back. a tactile way of seeing.

The Brainport sends visual patterns via the tongue.

Can they create sensory substitution for people that are deaf?

Eagleman’s team has created a device that captures sound and translates it to a vibratory meter. The pattern is not like reading braille. The brain is receiving the signals and interpreting it as if it were sound. There’s a wrist band with less resolution but also provides the feedback (8 electrodes).

The human Umwelt is unlocked. How can we experience the universe with senses never considered.